After 16 years of "wild marriage": dream wedding in the Seychelles! :-)

After 16 years of "wild marriage": dream wedding in the Seychelles! :-) 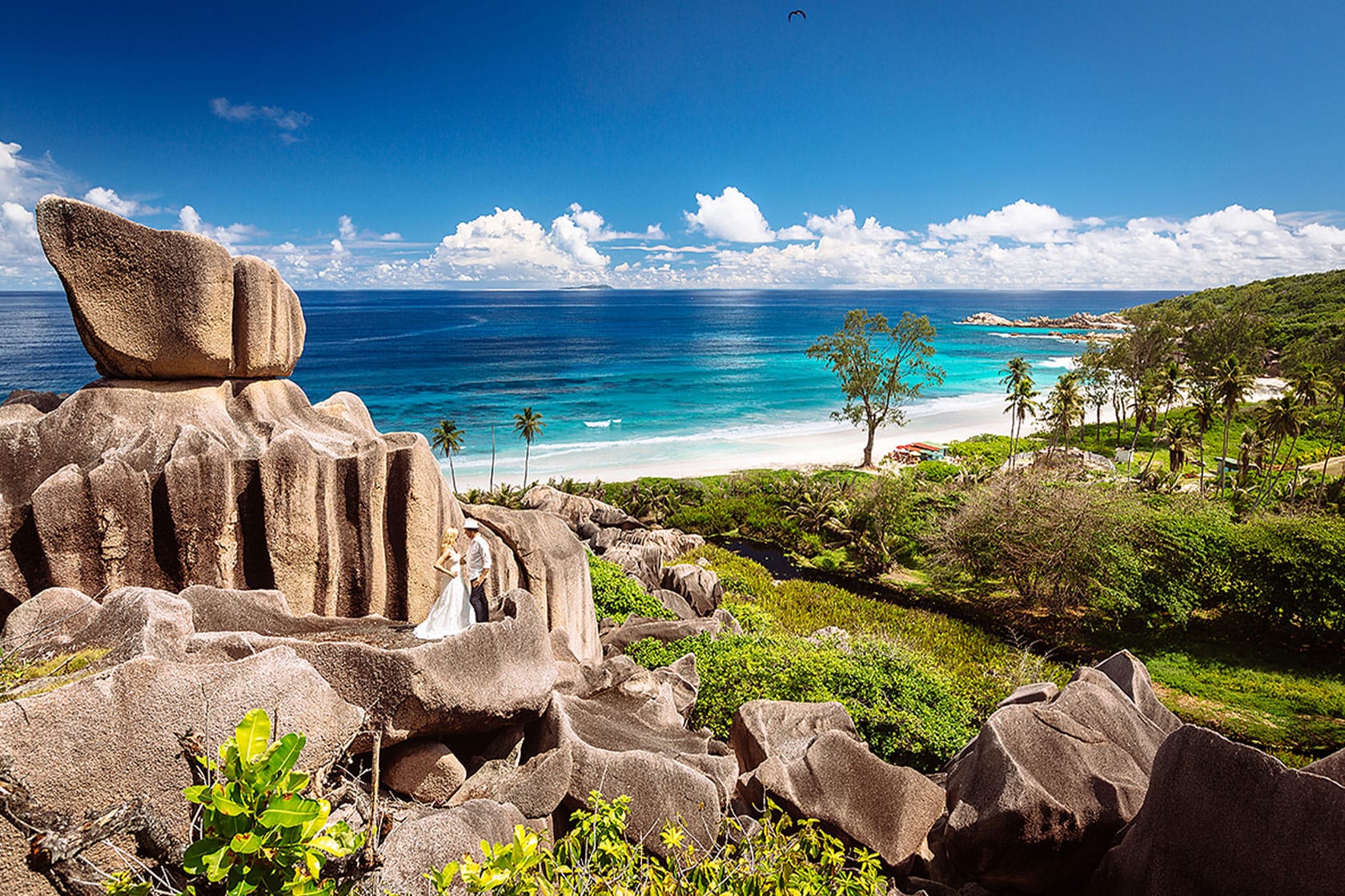 Let me introduce you: Andrea and Gaston! You probably spotted the bridal couple right between the rocks, didn't you? If not, just click on the picture and you will automatically get to the larger version. By the way: The "black something" at the top of the picture is not a dust lint, but a real Seychelles fruit bat! 😀

In any case, the two extremely likeable Northern Hessians have been a couple for 16 years and have two growing daughters - so it's high time to finally enter the port of marriage!

And why, of all people, did you choose the Seychelles? For this every "my" couple has at least a good reason. Andrea and Gaston have a real "story" behind them. I'm gonna take a little more of this up:

In 2008, the two of them took part in a radio competition, entered the final together with another couple and had to board a plane with the other couple on the same day, which took them to the Seychelles brought!

After landing we went directly to the noble hotel Sainte Anne Beachcomber Resort on the eponymous Isle of Sainte Anne off the coast of the main island of Mahé. Arriving at the reception, both couples had Estimate question This was: "What percentage of the German population uses the toilet for phone calls?"

Andrea and Gaston had to answer first. after a short consultation, they agreed on 20%. the other couple then only had to answer "more" or "less" - and were right with "more". with tears in their eyes, Andrea and Gaston had to go back to the airport immediately and then board the same plane that they had landed an hour earlier! and this flew back to Germany after refueling... 🙁

Still on the return flight the two swore to travel back to the beautiful archipelago sometime, of which they had unfortunately seen little more than the airport. At the beginning of October 2013 I received this short mail from the two:

"we are currently planning our wedding in the seychelles. since only you are the perfect photographer for us, it would be great if you could spend some time with us. please let us know if or when you are available. best regards Gaston and Andrea"

so, the "perfect photomaniac"! of course it went down like oil. as a "thank you" the two got the "ultimate photo package" from me: to actually five (!) days we did together great photos on La DigueI would like to show you a first of the many hundreds of photos today and believe me, there will be many more in the next weeks and months! 😀

Andrea and Gaston only know two of the many great pictures, by the way. they will come to pick up the "collected works" at the weekend here at the Niederrhein! and after the mulled wine at the christmas market in Hamminkelen we will surely have a drink or two on the Fotomannsche sofa. Takamaka and about the wonderful Wedding in the Seychelles chatting... 😀